Early versions of Windows didn't have much protection to prevent the spread of any virus, because people typically bought their software on a disk, so they weren't downloading apps that might contain a virus. However, as the malware problem became more prevalent (as more people downloaded software), a series of security protections were introduced. Each of these is described in the approximate order in which Microsoft implemented them:

Newer versions of Windows come with a virus detector (Defender). If you run a security scan on Pathways with Defender or other popular virus detectors, you will see that Pathways is virus free. Also, Pathways is available on download sites such as Download.com that checks the software before making it available, to ensure that it contains no virus.

Notwithstanding that there is a virus checker, there is still some risk if someone invents a new virus that the checker isn't aware of. Therefore, Microsoft built additional protections into Windows...

Beginning with Windows Vista and in subsequent versions (Windows 7, 8, 8.1, and 10), an app cannot alter Windows system files without being given permission to do so. Only users with "admin rights" are permitted to run programs that alter system files. An installer program, by its nature, will update the registry and system files, and that is why a user needs admin rights in order to install anything. It is assumed that the administrator is confident that the software is safe. This was introduced to please corporations, who would give admin rights to their IT department but not other users of their PCs.

Warning about installing apps that are not "tamper proof"

In recent versions of Windows, a warning will be presented by Windows if you attempt to install an any app that lacks a digital signature.

The newest version of Pathways is "digitally signed". To see the certification, you can right-click any of the Pathways executable files (such as Pathways.EXE, typically found in the "C:\Program Files (x86)\Pathways" folder) and choose properties. In the properties window, click the "Digital Signatures" tab. The certification will appear in properties as shown here: 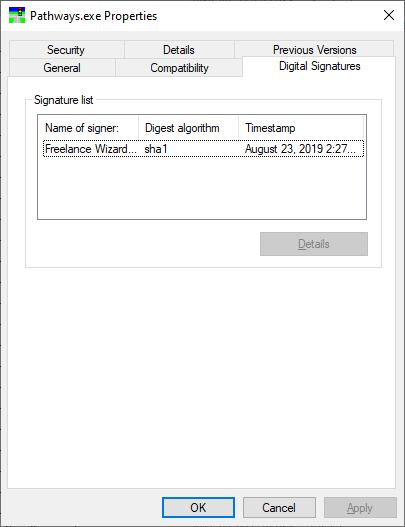 Windows Smartscreen warning/blocking of apps not from the Microsoft Store

As a further measure to ensure that users get high quality, safe apps, Microsoft is encouraging users to get all of their apps from the Microsoft store. Microsoft does quality and virus checks on all software offerred through their store.

In Windows settings, you can set an option to block all apps that don't come from the Microsoft store. Or you can permit non-store apps, and choose whether or not to get a "smartscreen" warning about such apps. These settings are covered in the Pathways Install Procedure.

If you permit non-Windows store apps to be installed with the warning option, then you can install other apps, but you will get a warning for any app not known to Microsoft as a major app that is on their "white list". Microsoft has an automated means of tracking how many times apps are downloaded into user's PCs around the world. A "recognized" app for their white list is one that has been downloaded many times without problem.

Unfortunately, this means that Smartscreen typically warns users about any app from an independant developer or small company, especially for apps that are designed to run across multiple versions of Windows, which are not eligible for distribution in the Windows store. Similarly you may get warnings about new versions of apps that haven't been distributed much yet. To read more about this problem, here are some references:

Pathways is an app distributed by a small company, and it is not available from the Windows store. To be distributed through the store, Pathways would have to be upgraded to meet standards associated specifically with Windows 10. This would ruin its compatibility with most older PCs (whereas the current Pathways will run on practically any old or new Windows PC).

Perhaps someday the author of Pathways will rewrite the software to meet Microsofts new conventions, but it would be a significant cost to do so, and inamuch as the software is given away free, that won't happen anytime soon.

So, if you wish to install Pathways on Windows 10, you must follow the Pathways Install Procedure (in particular the part applying to Windows 10) so that non-store apps are permitted on your PC. Or you can choose to use Pathways Direct instead, which doesn't need to be installed, and therefore there is no Smartscreen warning or blocking.